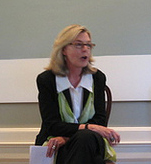 Lucinda Barnes joined the staff of the University of California, Berkeley Art Museum and Pacific Film Archive in 2001 as senior curator for collections, and in 2007 was named chief curator and director of programs and collections. Prior to coming to Berkeley, Barnes was the executive director of the Boise Art Museum, Idaho. She has also served as curator of collections at the Museum of Contemporary Art in Chicago, curator of modern and contemporary art at the Allen Memorial Art Museum at Oberlin College, and has held senior curatorial posts at the Newport Harbor Art Museum (now the Orange County Museum of Art) and the University Art Museum, California State University Long Beach. Barnes has taught at a number of colleges and universities. She received her B.A. from New York University, an M.A. from Williams College, and Ph.D. (ABD) in art history at the University of Southern California. In 200809, Barnes served as a UC Berkeley Townsend Center for the Humanities Fellow. At BAM/PFA Barnes has curated and co-curated a wide range of exhibitions, including Measure of Time (2006), Joan Jonas: the Shape, the Scent, the Feel of Things (2007), Mahjong: Contemporary Chinese Art from the Sigg Collection (2008), Material Witness (2009), Human/Nature: Artists Respond to a Changing Planet (2009), Indeterminate Stillness: Looking at Whistler (2010), Abstract Expressionisms (2012), Hofmann by Hofmann (2014), and American Wonder: Folk Art from the Collection (2014). In addition, Barnes has served as curator in charge of major traveling exhibitions at BAM/PFA, such as Drawn by the Brush: Oil Sketches by Peter Paul Rubens (2005), Enrique Chagoya: Borderlandia (2008), James Castle: A Retrospective (2010), Whats It All Mean: William T. Wiley in Retrospect (2010), Kurt Schwitters: Color and Collage (2011), Silence (2013), and Forrest Bess: Seeing Things Invisible (2014).