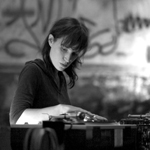 Marina Rosenfeld is a New York-based composer and artist working across disciplines. Since the 1990s, when she mounted her first all-female electric-guitar ensembles under the name Sheer Frost Orchestra, her works have probed the intersections of experimental practices in sound with performance, installation and sculpture, with solo presentations at institutions including the Park Avenue Armory, the Museum of Modern Art, the Bard Center for Curatorial Studies, Portikus Frankfurt, the Kitchen, and The Artists Institute, among others. Her work has been included in the Whitney (2002 and 2008), Montreal (2015), and PERFORMA (2009 and 2011) biennials, and international surveys including Every Time A Ear Di Soun (Documenta14), and Tasmanias Dark Mofo in 2019. In the contemporary music field, she has created works for the Holland, Borealis, Wien Modern, Time:Spans, Maerz Musik, Vancouver, Pro Musica Nova, Donaueschingen and Ultima festivals, among many others. Rosenfeld has also performed as an experimental turntablist since the late 1990s, creating improvised music with a distinctive palette of hand-crafted dub plates. Her collaborators have included Christian Marclay, George Lewis, Okkyung Lee, Ikue Mori, Annette Henry aka Warrior Queen, Ben Vida, DJ Olive, and Christoph Kurzmann, among many others too numerous to list. As a composer for dance, Rosenfeld created live improved music for the Merce Cunningham Dance Company between 2004 and 2008, and composed original scores for choreographers Ralph Lemon (Scaffold Room, 2014-2015) and Maria Hassabi (PLASTIC, 2016, STAGED?, 2017, and STAGING, 2017-2018). During 2019 Rosenfeld was Inga Otto Maren Fellow of Robert Wilsons Watermill Foundation, and in 2020 begins a collaboration with Experiments in Art and Technology at Bell Labs Nokia. Rosenfeld has been the co-chair of the MFA in Music/Sound at Bard College since 2007, and has been a visiting professor in sound, sculpture and performance at Cooper Union, Harvard, Yale School of Art, and Brooklyn College.