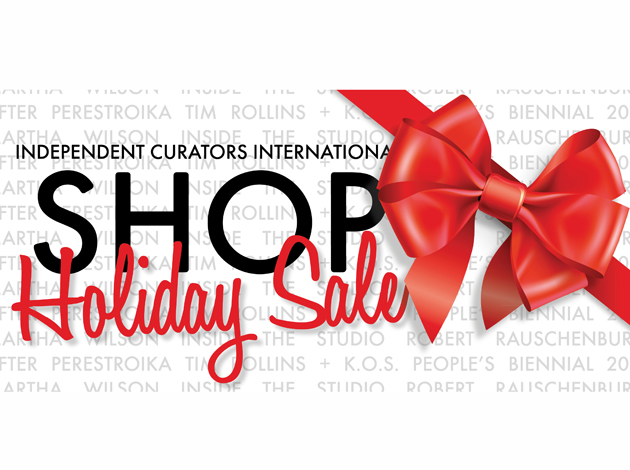 From now through January 7, ICI is offering a 10% discount on two Limited Editions and a selection of publications: scroll down to add directly to your cart.

Robert Rauschenberg Untitled, Ft. Myers, 1979/91 Silver gelatin print 11 x 14 inches Edition of 75 $1,000 Sale Price: $900 + shipping In 1970, Robert Rauschenberg moved from New York City to Captiva Island in Florida, which is connected to the mainland by a three-mile-long causeway stretching from the southwestern reaches of Fort Myers. It is there at Fort Myers that the artist created this Limited Edition for ICI. This work was undoubtedly inspired by the unique beauty that composed his new surroundings.

Peoples Biennial 2010: A Guide to Americas Most Amazing Artists Retail: $35.00 Sale Price: $17.50 Peoples Biennial is a project that examines the works of artists who operate outside the sanctioned mainstream art world. Conceived by the artist Harrell Fletcher and the exhibition-maker Jens Hoffmann, the collection includes 36 artists working in cities that are not considered the primary art capitals: Haverford, PA; Portland, OR; Rapid City, SD; Scottsdale, AZ; and Winston-Salem, NC. The hard-cover guidebook of the little-known and overlooked practices, Peoples Biennial represents a real snapshot of creative practice in America today, including work ranging from documentary photographs of military life to video works focusing on the biological activity in urban ecosystems.

Inside The Studio Regular Price: $29.95 Online Sale: $15.00 In 1981, Independent Curators International began New York Studio Events program, an annual series of visits to the studios of prominent artists. Inside the Studio presents excerpts from the talks delivered by nearly seventy of these artists to their guests over the last two decades. Transcribed, excerpted, and shared here for the first time, ICIs tapes of these talks constitute a remarkable record of the thinking and conversation of key artists of the 80s, 90s, and today. From one speaker to the next, the reader moves among radically different creative universes, listening in on a chorus of ideas about a hundred different subjects in the field of art. The artists variously provide personal insights, philosophical reflections, stories, and discussions of the origin and evolution of their practice.

After Perestroika: Kitchenmaids or Stateswomen Retail: $17.95 Sale Price: $8.95 Accompanying the exhibition of the same name in 1994, After Perestroika examines the shifts in women’s lives by exploring depictions and imagery of women in the former Soviet Union, challenging cultural attitudes, and bringing to light the socio-political climate for women and artists during the 90s in the post-Soviet states.

Martha Wilson Sourcebook: 40 Years of Reconsidering Performance, Feminism, Alternative Spaces Retail: $24.95 Sale Price: $12.50 Martha Wilson Sourcebook: 40 Years of Reconsidering Performance, Feminism, Alternative Spaces is a collection of primary research materials consisting of rare archival documents and excerpts of landmark publications that influenced Wilson and her approach to activism and art. Martha Wilson Sourcebook is the first in a new ICI publication series that offers a fresh perspective on social, political, and cultural issues impacting and inspiring artists practices, comprised of materials that the artist selects from their own archive and annotates with personal commentaries. Wilson’s selection encapsulates the contestations around feminism, performance art and alternative spaces, accentuating the ways that identity and positioning are not just self-defined or projected, but also negotiated within ones environment and through ones critical reception. This unique selection of materials documents Wilsons actions and work and reveals her interest in fellow artists such as Vito Acconci, Carolee Schneemann, Nancy Spero and Lynda Benglis and includes in its entirety Lucy Lippards exhibition catalogue for c. 7,500, the groundbreaking 1973 exhibition of women Conceptual artists, which first declared the significance of Wilsons work.