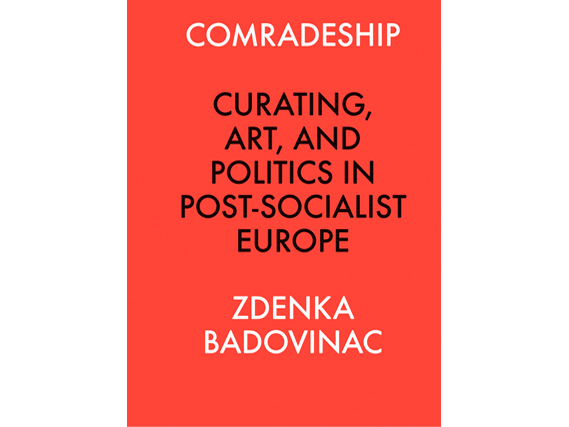 Comradeship: Curating, Art, and Politics in Post-Socialist Europe: Book Launch Friday, February 15, 2019 79pm e-flux 311 East Broadway New York, NY 10002 FREE and open to the public We are now in the second decade of the West taking interest in art from other places. There are many reasons for this development, including the fall of communism in the early 1990s, the ensuing new geopolitical situation in Europe, and the rapid processes of globalization in that decade, all of which have effected lasting changes in the world-map of art. Comradeship: Curating, Art, and Politics in Post-Socialist Europe gathers twenty years of writings from disparate and hard-to-find sources alongside new texts from the forward-thinking Slovenian curator, museum director, and scholar Zdenka Badovinac.
Join Zdenka Badovinac and Ana Janevski for a presentation and conversation considering the trajectory of Badovinacs work as it is articulated through her new publication. This is the third book in ICIs PERSPECTIVES IN CURATING series, which offers timely reflections by curators, artists, critics, and art historians on emergent debates in curatorial practice around the world. Badovinac has been an influential voice in international conversations rethinking the geopolitics of art after the fall of communism, a ferocious critic of unequal negotiations between East and West, and a historian of the avant-garde art that emerged in socialist and post-socialist countries in the last century. She has been, moreover, an advocate for radical institutional forms: museums responsive to the complexities of the past and commensurate to the demands of the present. Preorder Comradeship: Curating, Art, and Politics in Post-Socialist Europe by Zdenka Badovinac, published by ICI. Available here. This event is accessible to people with mobility disabilities. Please contact ICI for additional accessibility needs. This program is supported, in part, by public funds from the New York City Department of Cultural Affairs in partnership with City Council, and the New York State Council on the Arts with the support of Governor Andrew M. Cuomo and the New York State Legislature.

PHOTOS FROM THE EVENT: COMRADESHIP BOOK LAUNCH AND E-FLUX