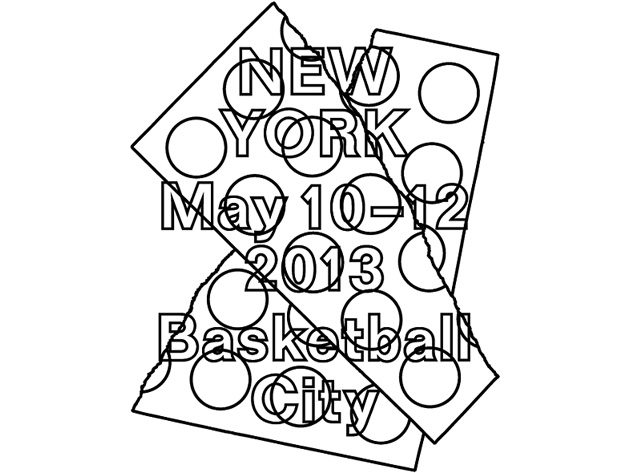 From May 1012, ICI will be at NADA New York in its new location at Pier 36 on the East River. Come visit us at booth 111, where we celebrate do it: the compendium, with two exclusive limited editions created by Marina Abramovi? and Stephen J. Kaltenbach in the spirit of the exhibition; the advance viewing of a short film on do it; and of course a special feature of the compendium, which is being launched this month. NADA New YorkMay 1012, 2013 ICI Booth 111 Pier 36Basketball City 299 South Street New York, NY 10002 (the corner of South St. & Montgomery St. on the East River) For more information, contact Bridget Finn at bridget@curatorsintl.org or at 212.254.8200 x124. ICI do it Limited Editions Marina Abramovic Untitled, 2012 do it catalogue (1997 edition), embroidered apron, wooden box 15 x 15 inches Edition of 20 + 5 APs (currently 2 of 20 sold) $5,000

Cant join us at NADA? Click here to purchase this edition, contact Bridget Finn at bridget@curatorsintl.org or at 212.254.8200 x124. Marina Abramovi? first contributed to do it with the inclusion of Spirit Cooking, a provocative and enticing recipe. This was in 1997, when ICI organized the first North American version of the exhibition, and published the well-known orange catalogue of artists instructions that accompanied it. 15 years later, Abramovi? has created a limited edition which takes as its starting point this iconic out-of-print publication. Untitled pairs the catalogue with a custom created do it apron presented in a handmade, square maple wood box. A boite-en-valise or a traveling performance kit, this piece contains the necessary items to realize a performance of your choice, following Abramovi?s instructions: Please dress yourself in the apron, open the book, and begin to realize the artists instruction of your choice. With this phrase, the artist will transform you into her own work, while you also engage in a dynamic and performative act. Marina Abramovi?s Untitled was realized for and produced by ICI in 2012, in an edition of 20, and 5 artists proofs. Marina Abramovi? was born in 1946 in Yugoslavia. In 2010, Abramovi? was the subject of a major retrospective at the Museum of Modern Art, which traveled to the Garage Center for Contemporary Culture in Russia. She was also the subject of visionary director Robert Wilson’s, The Life and Death of Marina Abramovi?, a critically acclaimed re-imagination of Abramovi?’s biography: the feature length documentary, Marina Abramovi?: The Artist is Present, premiered in January 2012 at the Sundance Film Festival. Stephen Kaltenbach Untitled, 2012 Stainless steel, secret contents 12 x 4 x 4 inches Edition of 20 + 5 APs (20 available for sale) $8,500

Cant join us at NADA? Click here to purchase this edition, contact Bridget Finn at bridget@curatorsintl.org or at 212.254.8200 x124. Stephen J. Kaltenbach is an important figure of the early Conceptual movement in California, and his work was recently seen Materializing “Six Years”: Lucy R. Lippard and the Emergence of Conceptual Art at the Brooklyn Museum, and in State of Mind: New California Art Circa 1970, an ICI itinerant exhibition, opening at the Bronx Museum in June 2013. Kaltenbach is known for issuing commands to his viewers. “BECOME A LEGEND, for example, was the eighth of 12 anonymous ads that the artist placed in Artforum between November 1968 and December 1969. These published works and Kaltenbach’s iconic Time Capsules, first realized in 1967 (pre-dating Warhol’s Time Capsules), generated an immense buzz at the time. Today, more than 40 years later, fellow artists, critics and scholars are still discussing the importance and depth of the artist’s practice, and of the Time Capsules in particular. The new ICI Limited Edition created by Kaltenbach is truly at the heart of his practice, and consists of a series of sealed Time Capsules, made of brushed stainless steel, and engraved with the instruction: OPEN BEFORE DEACCESSION. With three simple words, the artist undermines such ideas as ownership, secrets and time, and the relation of the concept to the art object. By employing the owner  if and when they decide to part with the work  to cut into the cylinder thereby destroying its structure, Kaltenbach allows one to reveal the contents of the capsule, transforming the artwork from object to idea. For now, the artist alone knows the contents of the capsule, which are different in each one, making every work in the edition a unique piece. Kaltenbach’s Untitled was realized for and produced by ICI in an edition of 20, plus 5 artists proofs. Stephen Kaltenbach was born in 1940 in the US and is now based in Davis. Recent solo exhibitions have been presented at Andrew Kreps Gallery, New York; Verge Gallery, Sacramento; Another Year in L.A., Los Angeles; Marzona Sculpture Park, Verzegnis; Konrad Fischer, Düsseldorf; and Lawrence Markey Gallery, New York. In 1969 he had solo exhibitions at the Whitney Museum and San Francisco Museum of Modern Art. He was included in Information at the Museum of Modern Art, New York in 1970; When Attitudes Become Form at Kunsthalle Bern in Switzerland, March at Seth Siegelaub, New York, and Nine at Leo Castelli at the Castelli Warehouse in 1969 and The Quick and the Dead at the Walker Art Center, Minneapolis, Minnesota in 2009. Past do it Limited Editions Rirkrit Tiravanija untitled (dont stop do it), 2012 2 mirror polished stainless steel stencils, cardboard box, 3 sheets of orange felt Box: 14 x 20 x 1.25 inches / Stencil: 13 x 19 x 1/32 inches Edition of 5 + 2 APs For more information, please contact Bridget Finn at bridget@curatorsintl.org or call + 1 212 254 8200 x124