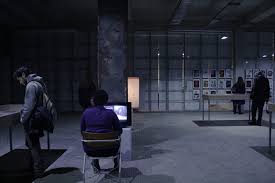 The Artists Brooklyn Studio 6.30 p.m. to 8:00 p.m. On Monday, May 2nd ICI will visit Janine Antoni in her Brooklyn studio. Since the early 1990s this prolific artist has been making seminal artworks contributing to the development and history of performance and installation art. Hear from Antoni herself about the physical and personal nature of her creative process. She has always plumbed the psychic closet (and the medicine cabinet) for material. She has taken in social views of womanhood and literally spat them back out as symbols of cleansing. And now she offers up herself yet again as beggar metamorphosing into Phoenix to propose the durability and elasticity of the reconstituted self. Like Beuys, whom she obviously reveres, Antoni is a missionary with an occult gleam. ELLEN BERKOVITCH, Reviews: Janine Antoni at SITE Santa Fe, Artforum. December 2002. Janine Antoni shows with Luhring Augustine in New York. In 2010, Antoni had a solo-exhibition at the University of Virginia Art Museum, Charlottesville, VA. She received the MacArthur Fellowship and the Joan Mitchell Foundation, Inc. Painting and Sculpture Grant in 1998, and the Larry Aldrich Foundation Award in 1999. Janine has exhibited extensively in the United States and abroad at venues including Luhring Augustine Gallery, The Wadsworth Athenaeum, The Irish Museum of Modern Art, The Reina Sofia, The Los Angeles Museum of Contemporary Art, The Whitney Museum of American Art, The Museum of Modern Art, The Guggenheim Museum, and The Aldrich Museum.