Patriarchy Over & Out: Discourse Made Manifest: Corina Apostol and Jasmina Tumbas 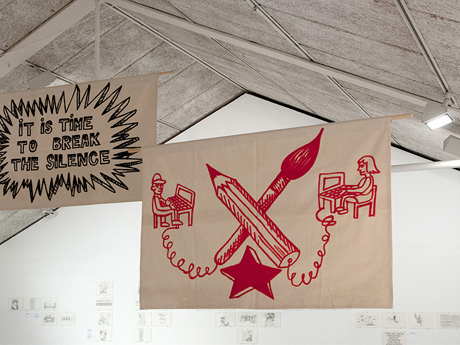 Patriarchy Over & Out: Discourse Made Manifest: Corina Apostol and Jasmina Tumbas Tuesday, June 4, 2019 6:30-8pm ICI 401 Broadway Suite 1620 New York, NY 10013 FREE and open to the public On June 4th join ICI for the launch of Patriarchy Over & Out: Discourse Made Manifest the fifth issue of ArtLeaks Gazette with co-editors Corina Apostol and Jasmina Tumbas. In conversation with ArtLeaks contributors, Ana Gruji?, Imani Henry, Betty Yu and Amy Weng we consider queer, trans, feminist, racial, and economic justice through discussion and visual exchange of related materials. This program, which foregrounds work from Publishing Against the Grain, an ICI traveling exhibition, continues ICI’s practice of bringing elements of our international exhibitions into our New York-based public programs to think together about our shared investments. One of over twenty-five periodicals included in Publishing Against the Grain, ArtLeaks is exemplary of the exhibition’s premise that slowing down can be a form of intellectual resistance. Patriarchy Over & Out: Discourse Made Manifest with Corina Apostal and Jasmina Tumbas activates the objects within the exhibition and engages with neighboring New York based-art collectives and grassroots organizations sharing similar objectives to that of ArtLeaks discourse. In a roundtable discussion of the publication that relies heavily on audience participation, ICI hopes that this event will engage the collaborative and investigative strategies central to the Publishing Against the Grain exhibition. This event is free and open to the public. To attend, please RSVP to rsvp@curatorsintl.org with PATRIARCHY in the subject line.

This event is accessible to people with mobility disabilities. Please contact ICI for additional accessibility needs. This program is supported, in part, by public funds from the New York City Department of Cultural Affairs in partnership with City Council, and the New York State Council on the Arts with the support of Governor Andrew M. Cuomo and the New York State Legislature.

PHOTOS FROM THE EVENT: PATRIARCHY OVER & OUT