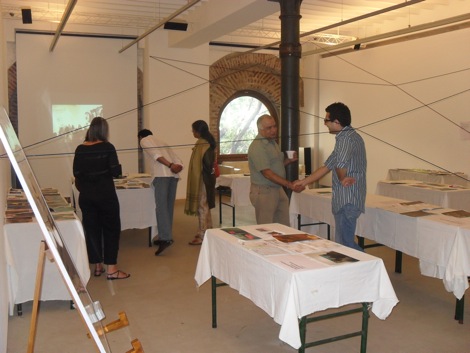 Installation views of Copyleft, the student organized exhibition developed through the course. December 16, 2010. What is the role of the curator? What do curators do, and how do they engage with artists, space, institutions and audiences? What kinds of research into artists and their work do curators conduct? What are the concepts and models that they use in the making of exhibitions? This program, co-produced with the Mohile Parikh Center in Mumbai, examined an evolving definition of contemporary curatorial practice, shaped by institutional professionals, independent curators and artists. Different curatorial models including solo and group exhibitions, film series, archives and commissions were considered and various contexts such as the museum, galleries or festivals were examined. With group discussion, the local curatorial context was also mapped and explored. This concentrated series of lectures, discussions and workshops provided three intensive days of training in the practice of curating a contemporary art exhibition. In addition to introducing the curatorial role and concepts of exhibition-making, the program included a hands-on exercise in conceiving a small exhibition presented in a gallery space, Chatterjee & Lal. On each day, a guest speaker presented their own professional practice, and experience working in the curatorial field in India. They included Geetha Mehra, Director of Sakshi Gallery, and curator of Finding India, an exhibition of Indian art that was concurrently on view at the Museum of Contemporary Art in Taipei, Taiwan; Pooja Sood, a New Delhi-based independent curator and the Director of KHOJ International Artists Association, an organization with programming all over India, which has acted as a unique nationwide support structure for artistic practice. Despite her 15-year involvement in the field, this was Soods first ever lecture in Mumbai; and Maithili Parekh, Deputy Director at Sothebys Art Auction House in Mumbai, who has worked very closely with major collectors and institutions throughout India.

Workshop seminar with Pooja Sood. December 15, 2010. Working through conceptual and practical considerations, the participants engaged directly with one of ICIs Exhibitions in a Box, Harald Szeemann: Documenta 5. This exhibition series is conceived to provide primary material for recipients to work with, to make further selections from and to interpret; it is intended as catalyst for curatorial experimentation. Harald Szeemann: Documenta 5 offered an archive related to internationally renowned curator, Harald Szeeman’s controversial 1972 exhibition in Kassel Germany, which was a watershed moment by virtue of its expanded–even exploded–program for curatorial practice. Among the crucial elements of Documenta 5 were Joseph Beuys’ Bureau for Direct Democracy, and 100 days of public performances and events as a new exhibition format. After extensive review and discussion of the box contents, the Mumbai participants generated a new plan altogether, drawing from the format and concept of the archive, from the subject of democracy, and from the concept of an event as a component of curatorial practice. They devised their own exhibition titled Copyleft, an archival exhibition documenting and appropriating the local art scene. This program was made possible, in part, by a grant from the Robert Sterling Clark Foundation to support the development of ICI’s training courses internationally; and by generous contributions from Toby Devan Lewis, James Cohan, the ICI Board of Trustees, ICI Benefactors Barbara and John Robinson, and ICI Partners and Patrons. Chatterjee & Lal was the venue sponsor for the Mumbai course.

The Mohile Parikh Center (MPC), Mumbai, is one of the leading centers in India devoted to Art, Culture and Education, with a focus on the visual arts, contemporary culture, media, underserved communities, and continuing education. Since its inception in 1990, it has provided extraordinary opportunities to both emerging and established artists, scholars from a variety of disciplines, cultural theorists, writers, students, children, and the general public to engage and interact with ideas and transformations in culture and society at large. In recognition to its contributions, the MPC has received grants from the Getty Foundation (2004) and its activities are presently supported by Hivos, Doen Foundation, Mondriaan Foundation & Arts Collaboratory. The MPC seeks to offer an integrated approach in interdisciplinary initiatives and lifelong learning by addressing cultural diversity, developing creative modes of pedagogy, and broadening the understanding of various knowledge systems in the contemporary world.

Chatterjee & Lal was formed in 2003 by husband and wife team Mortimer Chatterjee and Tara Lal. Based in Colabas art district, the gallerys program is focused on the work of artists working within India or those with a special interest in the region. Over the last seven years the gallery and its artists have formed an important node in the citys maturing art scene. In addition to the exhibiting of work within the confines of the gallery, Chatterjee & Lal has also organised a number of projects that have utilised non-traditional spaces within the city by artists that use mediums as diverse as performance, video and installation.