Artist Peter Fend Responds to “A New Map for America” 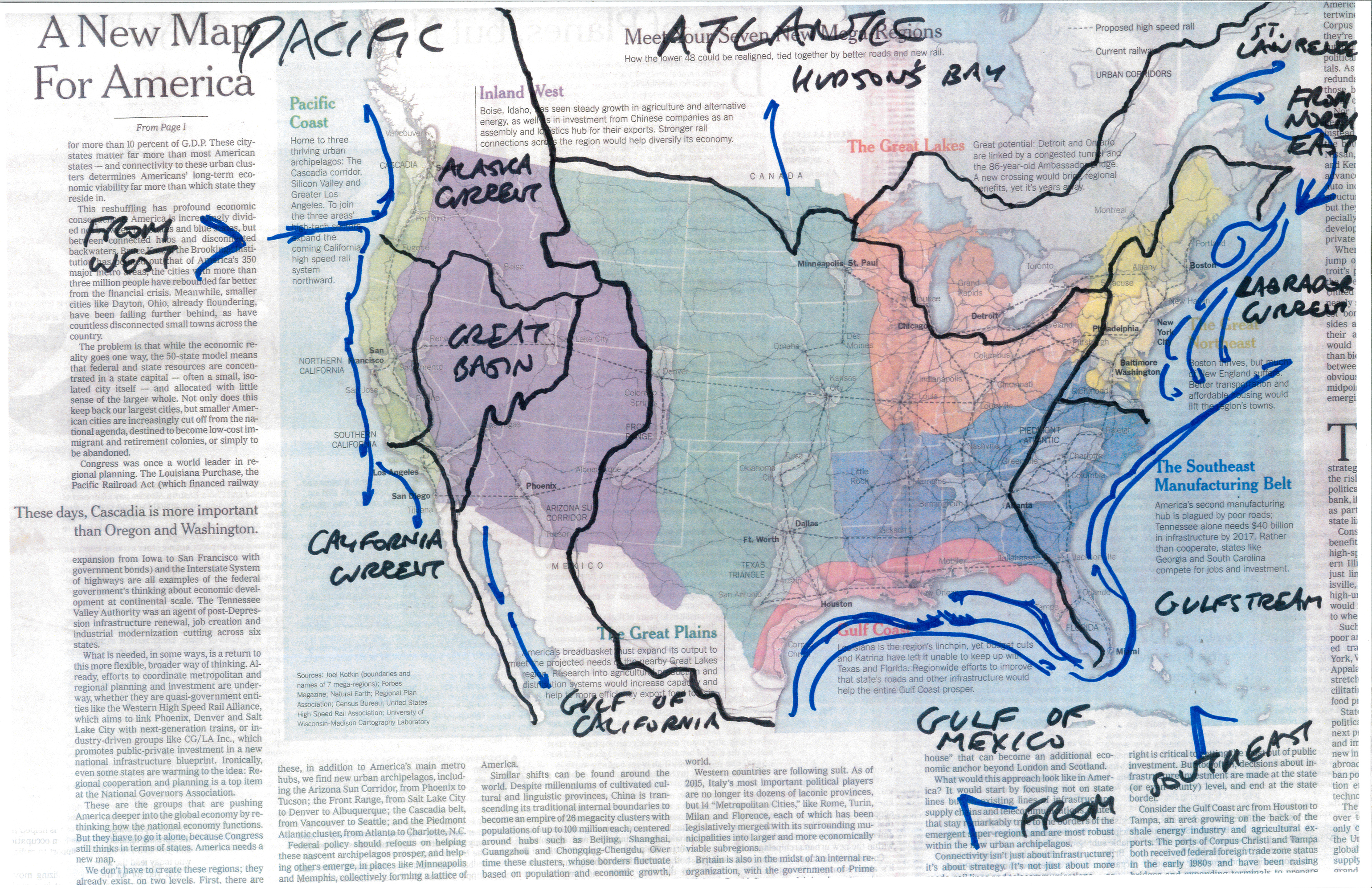 When The Ocean After Nature artist Peter Fend visited our office on April 20, 2016 to discuss his work in ICI’s upcoming exhibition, he brought along with him his annotation of the April 17New York Times opinion piece “A New Map For America.” Below is Peter Fend’s explanation of his response.

“A New Map for America” (Sunday Review, April 17) was published, in similar delineations, but for all of North America, 36 years ago, by young citizens of the USA, all of whom have gone on to gain cultural prominence. The citizens were visual artists in NY.  They banded together in 1979 as The Offices of Fend, Fitzgibbon, Holzer, Nadin, Prince & Winters.  At that time, they offered consultations to clients outside the art world, in renewable energy, in 1st Amendment principles, in naming and publicizing an institution, in re-directing UN agencies.  The Offices has split up, as often happens in the art world, but the group has continued to spark changes in policy. Now, the “New Map for America” can be reclaimed and directed towards its original objective:  “Political Economies After Oil.”

Organizing North America, not just the USA, into “more functional configurations,” we used the principle of gravity.  Water, soil and waste flows downhill, to the sea.  Water is crucial.  The divisions of flows to the sea in the USA roughly align with the colored areas proposed by Parag Khanna.  Yellow is the Northeast Seaboard; we simply limit it to the Appalachian ridge.  Purple and light green are west of the Continental Divide, flowing to the Pacific or Great Basin.  Orange, green and much of the brown and blue slope towards the Gulf of Mexico. The Tidewater South separates from the Northeast about where the warm Gulfstream separates from the cold Labrador.  As Mr. Khanna asserts, the Great Lakes should be co-administered with what slopes in from present-day Canada.  We showed all this in 1980 Organize by basins, including the saltwaters, and one can address this fact, asserted by Holzer in her headline for our map:  “The present political and economic division of space does not satisfy our needs.”  That was in 1980.  The situation now is much worse.

Do not think of Parag Khanna’s analysis and proposal as a fresh perspective.  A similar voice, backed up by worldwide research and development in decades since, was advocating for these very reforms two generations ago.  Halfway through that span of time, in December 2001, I opened a cover story in Mute magazine featuring such thinking with the phrase “To get beyond the present impasse, we must go beyond petroleum.”

Our proposal for reorganizing North America along watershed lines has not gone unoticed.  In 2012, when Ernest Callenbach, an early promoter of these ideas [in his Ecotopia series], died, the 1980 poster was re-exhibited internationally.  When will the ideas sink in?  Under whose Presidency will we act?  To “make America great again,” or to have “a future to [survive] in,” we need to restore our soil and water, along the lines of “a new map.”