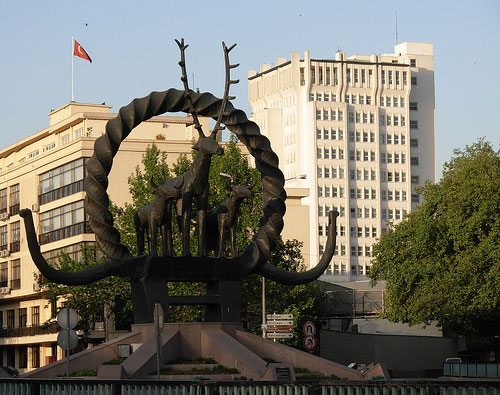 Hititte Sun Course Nusret Suman 1978, a copy of a Hitit finding in Alacahöyük, that became the symbol of Ankara in 1973, more examples of sun courses may be seen in the Museum of Anatolian Civilizations.

This project brings together two artists who have, at the base of their practice, extensive research into a wide range of histories as well as narratives that expand possible readings of personal and political events. This project brings Biscotti and Zaatari into the specific context of the Museum of Antonian Civilizations, one of the first cultural institutions established by the Turkish Republic, at the time of the nation’s foundation, 1923.

Akram Zaatari co-founded the Beirut-based Arab Image Foundation in 1997, and he has been working on the extensive archive of Hashem el Madani’s Studio Shehrazade, in the Lebanese port city of Saida, since 1999. His works have been featured in dOCUMENTA (13) (2012), the Istanbul Biennial (2011), and the Venice Biennale (2007), among others, and he has shown his films, videos, photographs, and other documents in institutions such as the Centre Pompidou in Paris, Tate Modern in London, Kunstverein and Haus der Kunst in Munich, Le Magasin in Grenoble, MUSAC in Leon, MUAC in Mexico City, and Videobrasil in Sao Paulo. Zaatari represents Lebanon at the 55th International Venice Biennale, and currently has a solo exhibition at Project 100, MoMA, New York.

This program is supported by the 2012 ICI/SAHA Research Award.