Recipient of the 2012 ICI Curatorial Fellowship 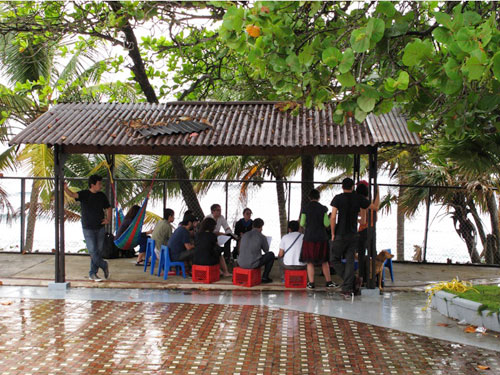 The first ICI Curatorial Fellow, Sofía Olascoaga, proposed to interrogate the critical and practical intersections between public programming, educational models, and the experience of utopian communities. Over the last 9 months Olascoaga has produced a number of forums through which to test her ideas and practices.

In February 2012 Sofía Olascoaga completed one of the first projects related to her Curatorial Fellowship at ICI as Director of The Clinics Workshops and as a coordinator and moderator for the panel discussion on utopian communities in Mexico, at SITAC X.

In 2012 the tenth edition of SITAC was directed by Shuddhabrata Segupta of New Delhi’s Raqs Media Collective. Under the title The Future: The Long Count Begins Again, this event built on SITAC’s history of visionary discourse, and brought together a group of intellectuals from various countries to discuss the foundations for a new way of looking at the art world’s possible tomorrows.

The Clinics are multidisciplinary working groups of local participants intended to generate critical feedback on the framework of the SITAC program. With Olascoaga as Director of the “Clinics,” SITAC X featured three working groups, led by Monica Castillo, Iconoclasistas collective from Argentina, and Ignacio Plá and Naomi Rincón-Gallardo, focusing on the practical and theoretical interrogations of Community?, Education?, and Working conditions? to address possible futures.

Between Utopia and Failure

Reflecting upon the need for utopian models, Olascoaga has been conducting research on a series of intentional community in Morelos, Mexico, as cases studies to explore the tensions between utopian drives and their lived experience. Her particular focus is on the successes and failures of communal living initiatives as well as the organizational models explored through them. Inspiring this project is a desire to learn and critically reassess previous generations’ experiments in communal living that have not been made visible as a tangible referent for the current generation. This project does not seek to create a formal writing of history but a direct recuperation of a community’s lived experience.

The research project titled “Between Utopia and Failure”, assesses the productive tension between utopia and failure of intentional community models developed in Mexico in past decades. The project traces the work and influence of radical thinker Ivan Illich, the intellectual community he started in Cuernavaca, and the role that model has played in the practice of many Mexican and international thinkers and artists (Susan Sontag, Abraham Cruzvillegas, Jimmie Durham, among others). Moreover, it approaches the questions and experiences posed by these initiatives as a way to respond to Mexico’s disrupted present.

CIAC for their generous support of this fellowship.