By misacuratorsintl-org on May J 2012 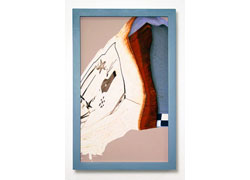 This Dispatch will be updated June through September 2012, further exploring the presence of glitch in modern and contemporary art.

A glitch is often regarded as an undesirable result of some form of system error or failure. Most of us encounter glitches in our daily lives, the result of which is often confusion, frustration and inconvenience, but they can also result in delight and wonder in the unknown. The term itself arises from technical jargon developed in the 60s primarily related to the field of electronic engineering, however its use has become ubiquitous in recent years and is readily used to describe any number of errors or mishaps in processes that range from the writing of code for complex computational analyses to making dinner plans with a friend. Within an expanding field of artistic practice, however, the term glitch is associated with certain aesthetic characteristics: interference, noise, (mal)function, corruption, stripping down/away, re-purposing, de/re-contextualization of information, and so on. As such, glitches are seen as having productive and generative potentialities for art-making, while they prompt us to reconsider our relationship to the systems that have come to dominate and shape our everyday life.

My interest in this subject matter was sparked by the growing visibility of glitch in art practices in Chicago, for the city has become an important nexus point for the aesthetics associated with glitch. A few months ago, while on a studio visit with Chicago-based artist Norm Wilson, the term came up in our conversation. Intrigued at first, I began to come across the idea of glitch again and again, seeing and feeling its effects all around me (art-related or not), until a strong interest began to take hold. This prompted some reflection on the idea, as it occurred to me that glitch is a relatively new term in the field of art, and yet its characteristics as it pertains to artistic production indeed has a much longer history. And so I wonder: is there something particular or unique about the term as it is used today?  Is there something different about our relationship to mechanical processes and systems that demarcates a new genre of activity? A crucial element of this question revolves around arts relationship to technology of course, but  in a more historical mindset  more specifically around arts relationship to systems of production and reproduction.

There have been significant advancements in recent years in the realm of technology, the implications of which, without fail, always seem to find their way into artistic methodologies. With those, the nature of glitch in relation to artistic production today has evolved, and over the next few weeks I will explore the connections between glitch and various artistic modes of production. In doing so, I will draw from specific examples that range from the historical to the modern and contemporary.

My first case study will be a return to the place of first encounter with glitch, with a focus on Chicago. In recent years the city has been the site of GLI.TC/H, a festival centered upon glitch art practices that has convened in various locations around the city and gathered practitioners from all parts of the world. The intentions of the festival are clear: GLI.TC/H aims to bring together like-error-minded bug collectors IRL to engage/chat/debate + share work/ideas/concerns + foster collaborations + raise-the-loading-bar on quality of work && thought && writing && endeavors w/in the glitch art communities. Their highly nuanced language evokes something of the jargon of the etymological history of the term glitch, yet also signals a departure.  My next post will thus engage the artists who produce the festival: Nick Briz, Rosa Menkman, and Jon Satrom; in conversation with them, I will find out how they came to be interested in and identify with glitch; what glitch means to them; where they see the practice/desire emanating from and may be headed; and what digitization has done to emancipate or constrict glitch aesthetics.

Next I will discuss the work of Chicago artist Norm Wilson, whose recent project ScanOps (2011ongoing) presents a related but different approach to the sensibilities of glitch art. Wilson has made a series of photographic objects that result from glitches within Google Books scanning software, thereby revealing the work and workers behind this process. The works themselves become sculptural, static images that simultaneously speak to the history of photography as well as new developments in access to information, copyright and intellectual property, that digitization and the Internet have played an important part ushering in. Interestingly, the images are the results of glitches in the system created by Google. They are not necessarily the actual glitches, nor were the glitches or the resulting imagery created by the artist, per se. Yet Wilson has discovered them (as found objects) and through carefully recontextualizing them, he draws forth their sociopolitical undertones. In this new light and through the collecting of these glitches, he puts on display a range of concerns pertaining to labor, the treatment of the workers charged with the task of scanning these books, and the conditions of creation that are made visible by the mistakes in a system designed to conceal such information.

As a curator, I am also inspired by exhibitions and their history, and the final part of my investigation will therefore examine a couple of examples from that history, where glitch has intersected with artistic practice. Consider FAX, a recent exhibition curated by João Ribas (currently of the List Visual Arts Center at MIT) and co-produced by the Drawing Center and Independent Curators International, New York. Ribas invited cultural producers of all types to submit art works via fax, that are then added to the growing accumulation of works on display in the gallery, thus making part of the artistic process the transmissions unexpected and uncontrollable effects on the works.

If modes of communication and systems of transmittance (and the erosion of such) are significant tenets of glitch art, then it may be found too in historical precedents such as Art by Telephone, organized by the Museum of Contemporary Art Chicago in 1969. Curated by Jan van der Marck, the exhibition consisted of artists literally phoning in their works to be created by other artists/fabricators on site, and in my final post, I will examine the glitch possibilities that emerged from van der Marcks proposition. 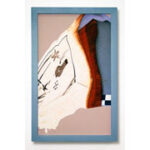