By kimberlycuratorsintl-org on January J 2016 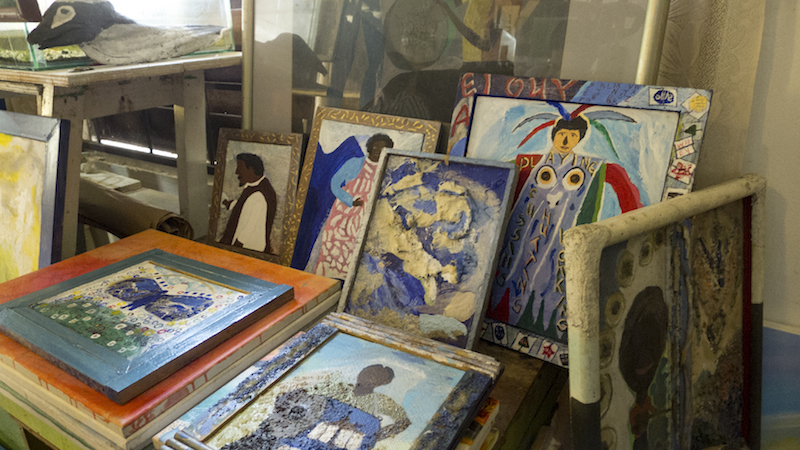 Recipients of the 2015 CPPC Travel Award, Leah Gordon and Andre Eugene, share their experiences from their research trip to Trinidad in September 2015 (Part 1 of 2).

We started off with a studio visit to Jackie Hinkson, a long-established Trinidadian painter and sculptor. He started his life as a painter 55 years ago. He said that the market for art is quite precarious for artists starting out in Trinidad, although he does support himself purely through his art. He told us that due to the oil money in Trinidad the island is quite rich, and he finds most of clients locally. Some of his paintings have an almost documentary quality, especially the series of paintings of street advertising. These works have the almost nostalgic quality of 1960s colour reportage of advertising illustrations, though they are commenting on the rise of visible street adverts and branding in the city, Port of Spain, in the current era. Jackie has also done a series of paintings depicting the streets during the carnival season in Trinidad.

(artist Jackie Hinkson and his work)

Emheyo Bahabba aka Embah, Trinidad’s most celebrated ‘outsider’ artist, had died only a month before we arrived in Trinidad. We had heard, anecdotally, that he had had some influence on Peter Doig and Chris Ofili’s style of work produced in Trinidad. We went to visit his niece, who was trying to store his work in her small house in the countryside. I was visually confused by his work as it encompassed so many different styles from abstract to figurative, collage to sculpture, and many small surrealistic installations. Seeing this work prompted a feeling that there should be some state-funded intervention to help his family archive and protect his legacy.

In the evening we met with Charlotte Elias, who used to run an extremely successful residency programme called CCA7. It is this programme that brought Chris Ofili and Peter Doig to Trinidad. It started in 1997 and closed finally in 2007. Part of their press statement when they closed read: “Our emotions are mixed: we are deeply saddened by the realisation that, even with financial support from our foreign partners, we continue to live in a country that lacks governmental and private sector support for culture and the arts. Since our inception ten years ago, we have attempted to tackle the formidable task of increasing awareness of and appreciation for visual art in our country, and the larger Caribbean region.” Charlotte said that she saw CCA7 as part of a global art initiative and saw people coming together as a great creative catalyst as materials. They always had the institutional ethos that it was about the process rather than the outcome, which is a sentiment we share with the Ghetto Biennale. The closure of the programme highlights how little seriousness the Trinidadian government gives to the visual arts.

Later we met with artist Ashraph Ramsaran, who makes a living by combining his studio practice with a business making frames for exhibitions. He said that many artists must have these survival strategies. Ashraph was saying that there is not really a culture or ideology amongst the wealthy to create and nurture a national arts movement. He mentioned that the banks used to build collections but seem to have closed down this activity. Most of the country’s wealth comes from the petroleum industry, and these companies do not appear interested in collecting to support Trinidadian culture. This is only supposition, but it could be because most of the oil companies are multi-nationals and therefore do not have a vested interest in cultural patrimony. In retrospect there is the opposite situation in the DR as family companies, mainly sugar and tobacco companies, have deeper vested interests both through the land and ancestry, and have invested quite considerably in the Dominican visual arts.

We met with Todd Gulick who is the production manager for Peter Minshall’s carnival workshop. We discussed Trinidadian history, as well as the rise of carnival and Peter Minshall’s role in the form of Trinidadian carnival today. Trinidad was a British colony but it was first owned by Spain. It was quite moribund so the Spanish, sensing unrest in Haiti, welcomed French planters who were allocated land in relation to the number of slaves that they brought. In 1792 the Spanish invited Catholics to come and live in Trinidad, and this introduced about 10,000 planters and slaves from Haiti. Many of these planters lived in an area called Paramin that has only developed a paved road going toward it in the last 20 years. People still speak a version of French Kreyol in this area to this day although it is dying out.

At first Eugene and I were surprised to hear of Haiti’s part in Trinidad’s past and realized that the nations are far more rigid now than the past in many ways. The community in Paramin believes that the reason that Trinidad has a carnival is because of its Haitian roots. By 1802, the island was then ruled by the British authorities. The carnival always played an important radical grassroots political role in organizing and agitating, especially kan boule (the cane burning), but this was tamed by the government in the early 1900s. The carnival spirit was to a certain extent revived in 1962 after Trinidad’s independence and the rise of Black Pride. A National Carnival Commission was created and traditionally most of the government funding for culture has been channeled into national carnival. There is a sense that there is a cultural divide between the visual arts which are unfunded, as they are not produced by the masses but by an elite. On one level this can appear to be a radical left-wing ethos; however, many people I met also said that it was political in that the masses can be co-opted through carnival for political and commercial interests.

We then drove to Che Lovelace’s studio in a remote countryside location. We spoke about the lack of infrastructure for visual artists. Che believed that artists needed architects and interior designers to promote their work. Interestingly Che also stated that carnival was a major theme in his work along with the body.

(Che Lovelace in his studio)

We met Kim Johnson, who runs the Carnival Institute, and has been making a film about Trinidadian carnival culture and history. We sat down and watched the film at his house, and really started to understand the divides between traditional and commercial carnival and the many unexpected parallels between Haitian and Trinidadian history and culture. I published a book of images and oral histories of Haitian carnival but did not consider that this would be a point of convergence during this research trip.

The research for this project was made possible by the generous support of ICI and Colección Patricia Phelps de Cisneros (CPPC) through the CPPC Travel Award for Central America and the Caribbean. 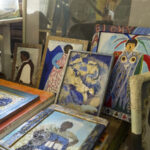