By kimberlycuratorsintl-org on July J 2018 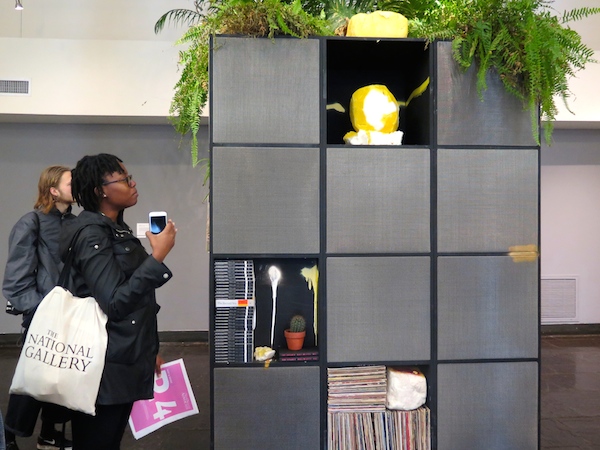 Prior to participating in the 2018 ICI Curatorial Intensive New Orleans, I had visited New Orleans on three separate occasions. What fascinated me about this port city was the blending of cultures, which was palpable in New Orleans’ architecture, music, food, and festival culture. Of course, at the root of this vibrant culture is the triangulation of colonialism, enslavement and commerce. The entanglement of beauty and violence, appeared to be the catalyst behind Prospect.4, titled The Lotus in Spite of the Swamp, which was organized by curator Trevor Schoonmaker and coincided, fortunately, with the Curatorial Intensive. Hybridity, fluidity, confluence, and cross-cultural exchange were the conceptual threads that connected the biennial to the structure of the intensive.

A running theme of the intensive was “site-specificity,” which took on different valences throughout the course of the program. The curators invited this year were encouraged to think critically about how our locales could inform our exhibitions. My cohort—comprising a talented, brilliant group of curators—were based in different cities, including New Orleans, Chicago, New York, Mexico City, San Francisco and Amsterdam. At the time, I was based in Detroit, working as a new Assistant Curator of Contemporary Art at the Detroit Institute of Arts. The diversity of cities represented in my cohort made for such productive discussions about the histories of the cities we were affiliated with, the local populations we wanted to represent through our exhibitions, and the ways in which the institutions we belonged to informed our exhibition-planning process.

We were also encouraged to think beyond our respective cities and institutions by considering the art world as a socio-political and economic landscape that can simultaneously hinder and catalyze curatorial ingenuity. How do we as young curators navigate such a landscape was a challenging question that repeatedly surfaced in our discussions about funding, institutional support, and the ways in which we, as curators, can abide by our respective standards of ethics and curatorial rigor. Edouard Glissant’s “poetics of relation” was a theory that crossed my mind during these conversations. Glissant’s theory posits that relations between people, cultures and systems run bi-laterally. In other words, both sides of a relation are fundamentally changed. Thus, while institutions bear a strong influence on how curators create exhibitions, curators also have the ability to influence institutions.

The seminars that were facilitated by guest speakers certainly brought the challenges of curatorial-institutional relations to the foreground. For instance, Sofía Gallisá Muriente, co-director of the art organization Beta-Local in Puerto Rico, led a seminar that challenged my cohort to think about how revolutionary movements could inform radical strategies of curatorial praxis and navigating institutional spaces. The Director of BxNU Research Institute at Northumbria University, Dr. Andrea Phillips, led a lively conversation about the paradox of the curator, who oftentimes, as a cultural laborer, straddles the line between privilege and socio-economic vulnerability. Andrea Andersson, the Chief Curator of the Visual Arts at the Contemporary Arts Center, New Orleans (CAC)—which was the hosting space for the seminars—educated us about her institution’s history as a kunsthalle. What I learned from Andersson’s seminar was how curating and the openness to creative risk-taking can vary from one institution to another.

Image: Rina Banerjee, Viola, from New Orleans-ah, a global business goods raker, combed, tilled the land of Commerce, giving America a certain extra extra excess culture, to cultivate it, making home for aliens not registered, made business of the finer, finer, had occupations, darning thread not leisure with reason and with luster, in a”peek a boo” racial disguises preoccupied in circulating commerce, entertaining white folks, pulling and punching holes in barriers, places that where was once barren, without them, white banks made of mustard and made friendly folks feel home, welcomed and married immigrants from noted how they have been also starved, fled from servitude and colonial dangers, ships like dungeons, pushing coal in termite wholes, curing fitre, but always learning, folding, washing, welcomed as aliens. She wandering, hosting, raising children connected to new mobilities and most unusual these movements in Treme’, New Orleans was incubating enmeshed embedded in this silken cocoon when she land, she’s came to be parachute mender, landed those black immigrant peddlers from Hoogali network of new comers (2017).

I would liken being based in the CAC and touring art spaces throughout New Orleans to a form of fieldwork that coincided with the roundtable discussions about site-specificity. In this case, theory and praxis went hand in hand. My immediate environment, the CAC, was a fertile ground for thinking about the intersection of curatorial praxis and institutions. As art institutions without permanent collections, kunsthalles have historically been sites of creative risk-taking and curatorial innovation. The CAC was indeed a case in point as a satellite of Prospect.4. A memorable artwork for me was a 21-foot tall installation (with a 40-word title!) by New-York based Indian artist Rina Banerjee, who incorporated discarded objects, textiles, and natural resources such as shells. The installation told a diasporic history that connected trade with cultural production and resonated deeply with New Orleans’ own history as a port city.

While the visits to different cultural institutions were insightful, one of the most memorable opportunities in the “field” was a studio visit with the talented—and hospitable—local mixed-media artist Dawn DeDeaux, who greeted us with an arrangement of po’boys, Zapps Potato Chips, and cocktails. DeDeaux’s body of work is nothing short of a response to her city, particularly the work the she made post-Katrina. I found the paradoxes of beauty and disaster to be very palpable in the artist’s work, including the glass works that charted water levels during Katrina, as well as mud-works DeDeaux made while she was temporarily displaced from her home. Fundamentally, Katrina had forced DeDeaux to use whatever materials she could find, which was the soil right under her. 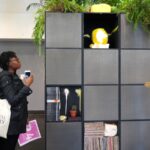