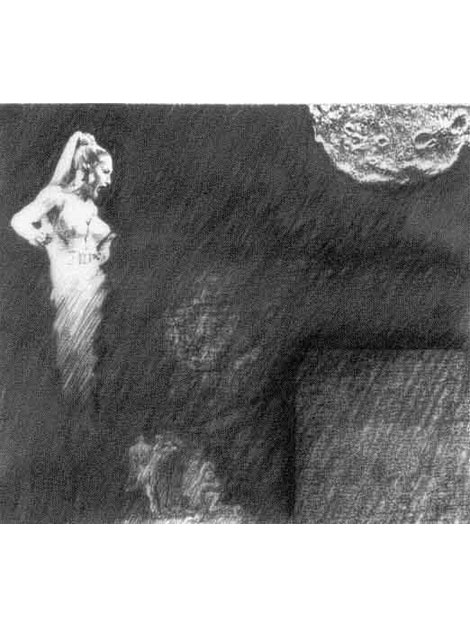 Robert Morris,, painter and sculptor,  is known for helping to define new art movements of the ‘60s and ‘70s, including Minimalism, after publishing an influential series of articles in New York and exhibiting his large conceptual, geometric sculptures that embodied many concepts of Minimalism. He also contributed to the fields of performance art, land art, Process art, and installation art by the use of experimental materials to create sculptures that challenged the physicality art. In the 1980s, he returned to drawing and painting, integrating them with sculpture to produce dark, apocalyptic visions.

Much of Morris’s greatest work no longer physically exists due to its transient quality, however, his work helped define many movements tied to concepts of impermanence , and lives on as a contribution to the history of art in photographs and written documentation. This Lithograph of Madonna, from her Blond Ambition Tour of 1990, is seemingly propelled like a rocket into the moon-lit night sky. The provocative character might well recall Morris’s penchant for taunting imagery (think of the iconic 1974 Sonnabend ad adorned by Morris in S&M gear).