What is shared, what is offered 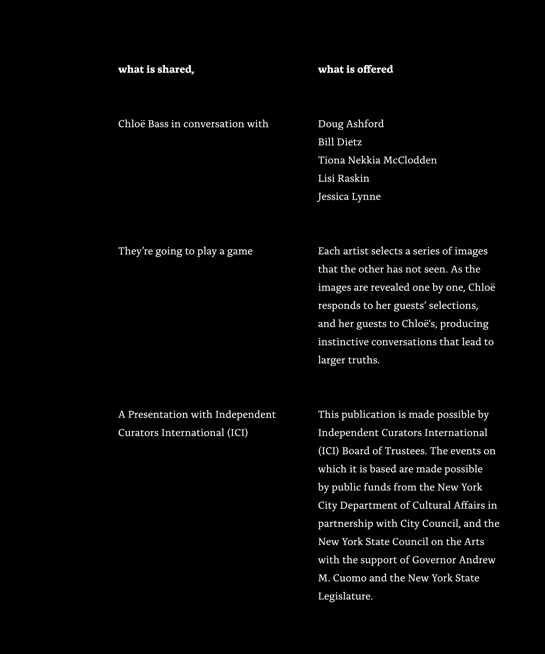 For exactly two years (2017-19) Chloë Bass has convened friends, colleagues, and fellow artists—Doug Ashford, Bill Dietz, Tiona Nekkia McClodden, Lisi Raskin, and Jessica Lynne—for intimate, yet public discussions at ICI in New York, as part of her ongoing project What is shared, what is offered. Bass’ new e-book, which shares this title, celebrates these conversations. The e-book includes an introduction by Bass, transcripts of the discussions from each event, and a newly commissioned text by artist, composer and performer Jeremy Toussaint-Baptiste reflecting on these events and the project’s structure.

What is shared, what is offered was part of The Book of Everyday Instruction, an eight-chapter project that investigated one-on-one interaction. In each of the event five events at ICI in New York, Chloë and her invited guest played a game. First, each selected a series of images that the other had not seen. At the event, images were revealed one by one and Chloë and her guest responded to one another’s selections.

For those who are not able to purchase the e-book, you may request a free copy by emailing research@curatorsintl.org.

“Instead of setting the stage for familiarity and comfort as politeness most often does, Bass’ announces the space in which she lets us know what she will and will not do for us. It is a smile that says, “No.”; It is the space in which she articulates her refusal to take control, to tell you what to think, to look for you, to, in a certain dramatically put sense, be “The Artist”; Which is not at all to say there is nothing to say, nothing to read or see — what there is is vast and infinitely specific and imbued with a rare intelligence and sentiment. But the only way you can see it is to take responsibility for your own seeing. To take responsibility for yourself as another singularity, a specific singularity bringing with it all the historical baggage that is positionality. Bass invites us to play a different game, one in which neither the rules nor we are familiar.”
— Bill Dietz, composer and writer,on Bass’ monograph, The Book of Everyday Instruction

About Chloë Bass
Chloë Bass is a multiform conceptual artist working in performance, situation, conversation, publication, and installation. Her work uses daily life as a site of deep research to address scales of intimacy: where patterns hold and break as group sizes expand. She began her work with a focus on the individual (The Bureau of Self-Recognition, 2011 – 2013), has recently concluded a study of pairs (The Book of Everyday Instruction, 2015 – 2017), and will continue to scale up gradually until she’s working at the scale of the metropolis. Chloë has held numerous fellowships and residencies; 2018’s include a residency at Denniston Hill, the Recess Analog Artist-in-Residence, and a BRIC Media Arts Fellowship. She is a 2019 Art Matters Grantee. Her projects have appeared nationally and internationally, including recent exhibits at the Knockdown Center, the Kitchen, the Brooklyn Museum, CUE Art Foundation, Elizabeth Foundation for the Arts Project Space, The Southeastern Center for Contemporary Art, the James Gallery, and elsewhere. Reviews, mentions of, and interviews about her work have appeared in Artforum, The New York Times, Hyperallergic, The Brooklyn Rail, BOMB, Temporary Art Review, and Artnews among others. Her monograph was published by The Operating System in December 2018; she also has a chapbook, #sky #nofilter, forthcoming from DoubleCross Press. Her short-form writing has been published on Hyperallergic, Arts.Black, and the Walker Reader. She is an Assistant Professor of Art at Queens College, CUNY, where she co-runs Social Practice Queens with Gregory Sholette.

E-books will be emailed early next week after purchased.