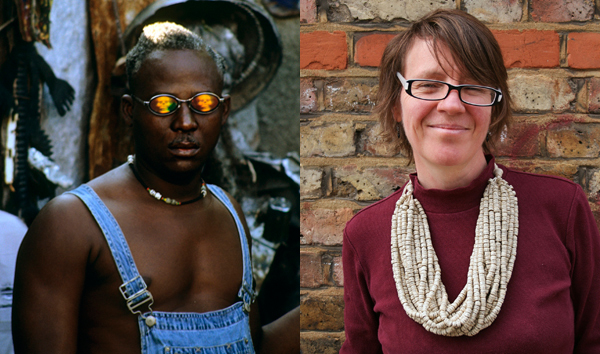 The Colección Patricia Phelps de Cisneros (CPPC) and Independent Curators International (ICI) announce André Eugène and Leah Gordon as the recipients of the 2015 CPPC Travel Award for Central America and the Caribbean.

André Eugène and Leah Gordon have been selected as the fourth recipients of the CPPC Travel Award for Central America and the Caribbean. The award supports a contemporary art curator based anywhere in the world to travel to regions in Central America and the Caribbean to conduct research related to art and cultural activities, generating new collaborations with artists, curators, museums, and cultural centers within regional networks.

Working collaboratively, Eugène and Gordon will use the award to travel together to the Dominican Republic and Trinidad & Tobago to research regional models of artists’ self-organization, alternative strategies of community education, and discover new exhibition networks for Haitian artists.

André Eugène (Haiti) is an artist and founding member of the artists collective: Atis Rezistans, and a broader movement known as the Sculptors of Grand Rue. In 2006 Andre Eugène contributed to a large-scale collective sculptural work, which is a permanent exhibit at the International Museum of Slavery in Liverpool. His work has been shown at the Muesum of Ethnography, Geneva; at the Parc de la Villette, Paris; the Fowler Museum, UCLA, Los Angeles; Nottingham Contemporary, UK and at the Grand Palais, Paris. His work was included in the Haitian Pavillion at the 54th Venice Biennale. Andre Eugène is the co-director of the Ghetto Biennale, which has been held in Port-au-Prince since 2009.

Leah Gordon (UK) is an artist and curator making work on Modernism and religion; anthropology and post-colonialism; slavery and industrialisation; and class and folk history. Gordon’s film and photographic work has been exhibited internationally including the Museum of Contemporary Art, Sydney; the Dak’art Biennale; the National Portrait Gallery, UK; Parc de la Villette, Paris and NSU Museum of Art, Fort Lauderdale. Her photography book Kanaval: Vodou, Politics and Revolution on the Streets of Haiti was published in June 2010. She is the co-director of the Ghetto Biennale in Port-au-Prince, Haiti; was a curator for the Haitian Pavilion at the 54th Venice Biennale; was the co-curator of Kafou: Haiti, History & Art, at the Nottingham Contemporary; on the curatorial team for In Extremis: Death and Life in 21st Century Haitian Art at the Fowler Museum, UCLA and will be the guest curator for the 2015 Paris Outsider Art Fair.

André Eugène and Leah Gordon‘s proposal was selected from 77 applications from 29 different countries. The selection was made by a jury of professionals, which included Pablo Guardiola (Co-Director of Beta-Local, San Juan, Puerto Rico), Catalina Lozano (independent curator, Mexico City, Mexico), and María del Carmen Carrión (Director of Public Programs & Research, ICI). In their selection, the jury considered the immediate and the long-term benefits and impact of each proposal for the places, institutions and artists visited, as well as projects that favor new understandings and readings of the artistic production of the region.

The Colección Patricia Phelps de Cisneros (CPPC) works to increase understanding and awareness of Latin America’s contributions to the history of art and ideas, and to support innovation, education, creativity, and research in the field of Latin American art. Through grants and partnerships, the CPPC also supports the professional development of Latin American artists, curators, and scholars. Recent initiatives include, among others, a sponsorship to create a Curatorial Fellowship at dOCUMENTA (13) in Kassel, Germany; a partnership with Hunter College (New York) to create the Patricia Phelps de Cisneros Professor of Latin American Art; and a grant for a Venezuelan artist to assist to the residency program Soma SUMMER in Mexico City.

ABOUT ICI
Independent Curators International (ICI) produces exhibitions, events, training opportunities, research initiatives, and publications for curators and audiences around the world. Established in 1975, ICI is headquartered in New York, but active around the world. ICI’s programs are presented and often developed in partnership with art institutions across the globe, therefore encouraging new infrastructures for art practice internationally, and inspiring fresh ways of seeing and contextualizing contemporary art.

Listen to Leah Gordon and Andre Eugene present at the ICI Curatorial Hub on January 26, 2016 HERE.

The 2015 CPPC Travel Award for Central America & the Caribbean